I think it's a success

I set out to do a couple of fast hours today, but it ended up being two and a half hours of less mileage than I planned on.  Still, the main goal was to sit on Dixie in the new saddle for several hours and see how well we fared, so I'll call it a success.

Today, everything was utterly terrifying.  I'd barely made it a mile from the barn when Dixie saw a jacket on a trail signpost (and heard the trail cleaning crew just out of sight around the corner) and went on high alert.  She backed up about twenty feet, snorting and trying to spin and run, and I was like, "Looks like I picked the wrong week to stop sniffing glue."

So we worked on bravely walking past the other trail traffic.  And there was a lot of it - I must've seen thirty people.  Tons of dogs, a few bikers, one treacherous baby stroller.  When we got to the far side of the park, we finally found a few pockets of solitude and got a little trotting in, but mostly we walked.  Mostly straight ahead, but sometimes we walked sideways or backwards.  :rolleyes:

The saddle seems to suit her.  Dixie had nice even sweat marks and no tenderness, and she only thrashed her head around when we hit a section of trail with flies.  (She spent the whole 35 miles at ROM flinging her head, which was the big blinking CLUE sign for me that she really wasn't happy.)

I think it suits me, too.  It's a wider twist than I'm used to, but my ligaments will stretch out and get used to it - plus it's good incentive to do yoga!  The seat is kind to my ladybits, but rubs my butt just a little - either I'll get used to that or I'll slather on the Butt Butt'r more regularly.  I can't keep my feet in the right spot in the stirrups, so I'm going to order caged stirrups.  Partly it's the twist making it hard for me to keep my heels down, but it's also the floppy English leathers that let the stirrups bounce more than I'm used to.  I think I'll buy some fleece and velcro and make covers for the leathers, too - if I like it, I'll get sheepskin covers at some point, but DIY fake fleece will do for now.

I thought I'd give yall the history of the bucking too, while I'm posting.

The arena at this barn is kind of scary.  One long side has trees and a cliff that drops down to the road below, where cars and bikers whizz by.  The other long side has the cliff going up, and about 20' above the arena is a small trail, where hikers sneak by on their way to whatever nefarious purposes hikers are up to.  A lot of the horses at the barn are reactive in the arena.  (In its favor, though, the footing is lovely sand, dragged every day by the amazing barn guys.)

Back in January and February, when it was raining all the time, I would ride once a week or so in the arena.  Dixie would spook every so often but she wasn't terrible.  Sometimes she'd crow hop but I'd yell and yank her head around and she'd knock it off.

One day in early March, we went out to the arena.  There was a kid on a lesson horse with the instructor and we shared the arena very nicely.  Then this cowboy came out with his wild-ass palomino.  The horse was wound way too tight, and when he put his foot in the stirrup it went sideways across half the arena with him hopping alongside, as one does.  Dixie lost her mind at that and hopped a few times.  I got her to stand and jumped off.  I didn't want to make the situation worse - that dude was not defusing things, and the poor kid was just trying to walk-trot, so we left.

Then yesterday I fiddled around with the saddle, rode her up and down the driveway hopping off and on and fussing with it, then went in the arena and she for-reals BUCKED.  I am a chicken, I admit, but I didn't feel confident riding it out in a new saddle with floppy stirrups blah blah blah, so we left again.  I'm sure it just cemented this notion that if she bucks in the arena she doesn't have to stay in the arena.  Sigh.

So my plan is to stay out of the arena for a while.  After I'm more comfortable in the saddle, and we do a longer ride, I'll peek in the arena when we get back.  If it's empty, I'll go Confront the Problem.  But I'm not willing to set off a chain reaction of horses spooking at other horses spooking and bucking, and I'm certainly not ballsy enough to have that fight with a fresh, fit Dixie.  It's always something...

And one last thing - this repost by ~C is well worth a read, especially for my maybe-durance friends! Endurance riding is not for all horses.  There's no shame in giving up on endurance if your horse hates it or can't do it.  All the unlikely success stories are just meant to inspire you to try it.  Give it 100% for a year or two, and if you can't get your horse through a 50, no big deal.  Get a different horse or a different sport!

It's something I've been thinking about a lot lately.  I want to move up with Dixie: not ride faster, but ride multidays or longer distances.  One day I want to do The Big July/August California Mountain Ride, and I don't know if she's the horse that'll take me to Auburn.  If Dixie says no to 100s, I'll be disappointed, sure.  But I won't know until we try to go further!
Posted by Funder at 3:13 PM 16 comments:

Email ThisBlogThis!Share to TwitterShare to FacebookShare to Pinterest
Labels: dixie, me, saddle, specialized

So one of the problems at Rides of March (aside from my malaise) was that Dixie's saddle wasn't fitting her quite right anymore. All the hill work we did at the beginning of the year really filled her back out and she got too wide for the saddle. I was pretty sure I needed a new saddle, but I didn't want to buy one right before (trying) a 50. After 35 miles at ROM, her back was tender, so after I got home and recovered I got a Specialized.

It (finally) came yesterday evening, so today I dragged it out to the barn and tried it on. I think it'll work just fine. Mine's used, and it came with 1/2" pads, the thinnest they sell. I ordered the standard 3/4" pads and they'll (finally!) show up tomorrow, so I'll probably swap them out. 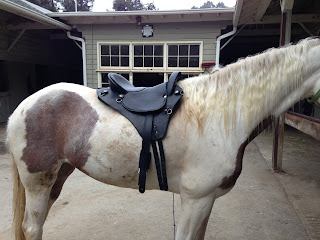 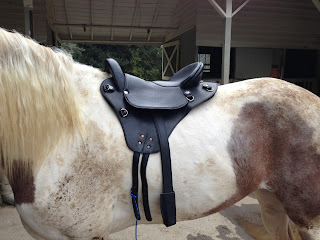 Left side fits pretty good at the shoulder. 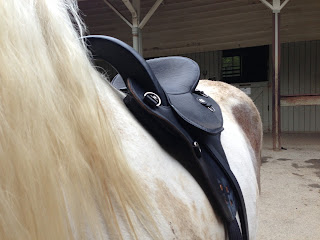 Here's her back, it looks like the right side is less developed, and that's the side that gapped the most.  If I was a better photographer/blogger I'd have pulled her mane out of the way, but alas, I am what I am. 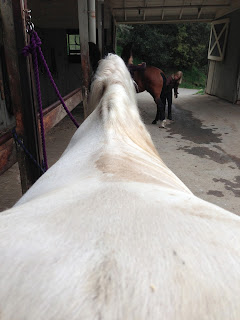 Right side.  Did you know it's hard to take pictures of the shadow cast by a black saddle on a white horse?  It's true!  It's really hard!  Trust me, there's a big hole there where I could easily stick a couple fingers.  I shimmed it and moved on. 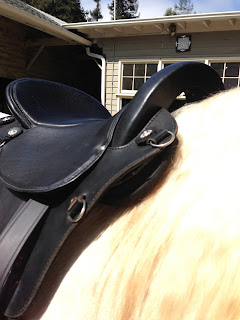 Had to go buy a pad and girth, and then jury-rig a loop to hook the breastcollar on to the stupid English girth.  (Who doesn't ride with a breastcollar?  What is wrong with you, girth manufacturers?) 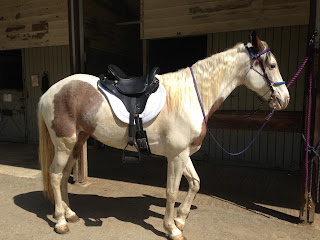 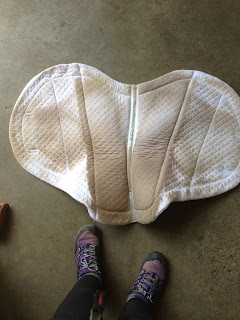 So I got on and off about five times, fiddling with stuff.  I thought very hard about which way the stirrups face and carefully installed them.  Then I led her to the mounting block and realized they were backwards.  I fixed that, then the leathers were too long, then I took the crupper apart to get a loop of biothane to make a breastcollar loop for the girth, then, finally, eventually, I went for a short test ride.

It wants me to sit up straight!  It's very much an English saddle stripped down for endurance.  My old saddle was a western saddle stripped down for endurance, so it's different.  But not, I think, bad.  We went in the arena and Dixie saw a monster (a person walking her dog) on the trail above the arena and bucked.  All four feet off the ground at once, a real buck.  I felt pretty secure and didn't move in the saddle, and I just yanked her head around and yelled.  (Somehow I managed to not scream obscenities at her.  Yall, it's really hard being around civilized people all the time.)

Anyway that was no fun, and I didn't feel up to riding it out on a fresh horse in a new saddle, so we went up on the short trail loop.  She felt really good.  She did most of the loop at a running walk, but we picked up a canter for one short bit.  She was moving really nicely under me, with a super sproingy collected canter.

Tomorrow I'll go do the long 15 mile loop, maybe with an extra hill climb or two, and see how I feel about the saddle and how she feels after some real work.  Maybe that'll take the edge off her and I'll take her in the damn arena and see if I can get ten minutes with no bucking.  This bucking bullshit has to stop.
Posted by Funder at 2:43 PM 17 comments: