So we’d walked in to camp, whooping and hollering, and convinced our tired ponies to trot out one more time, and we were done. I got Dixie parked at her buffet, pulled her tack, and blanketed her. I honestly can’t remember if Kaity’s mom Carol helped me here or not — I know she helped blanket in the dark at least once, but was that dinner, finish or both times? It is a mystery!
Somehow I got my bra off, a clean-ish shirt on, my shoes off, and some chemical hand warmers shoved in the bag with me. I carefully tucked one between my boobs (ahhhhh my core was so warm!), set an alarm for 7:30, and passed out at 3:30.
At 6:30 I woke up, because it was blindingly bright and I had to check on my girl. She was just fine: no filling in her legs, sound, cheerful, rather happy to see me. I started staggering around packing up to head home. 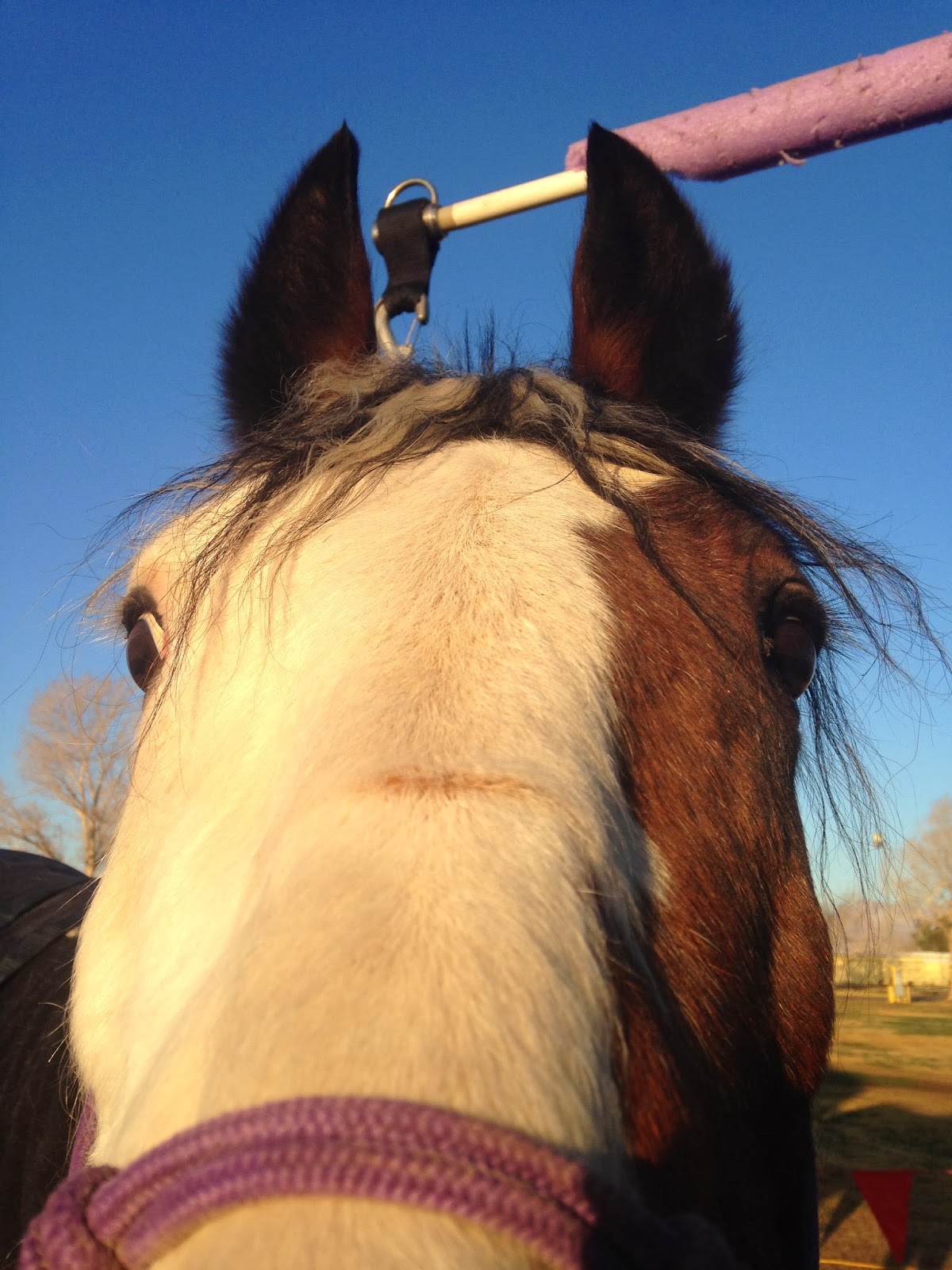 She's always so hopeful that the camera is edible. (And see the rub mark on her nose?) 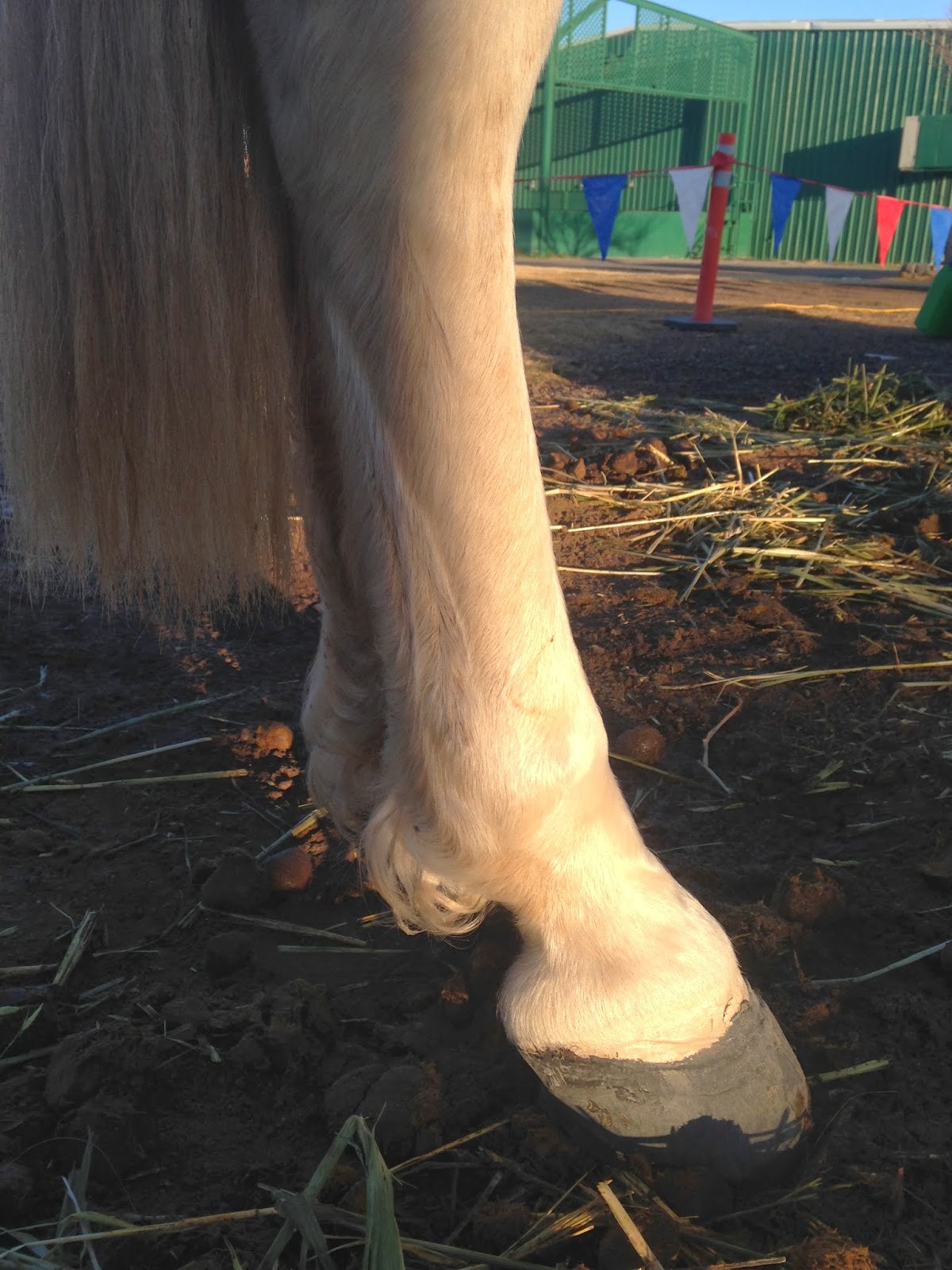 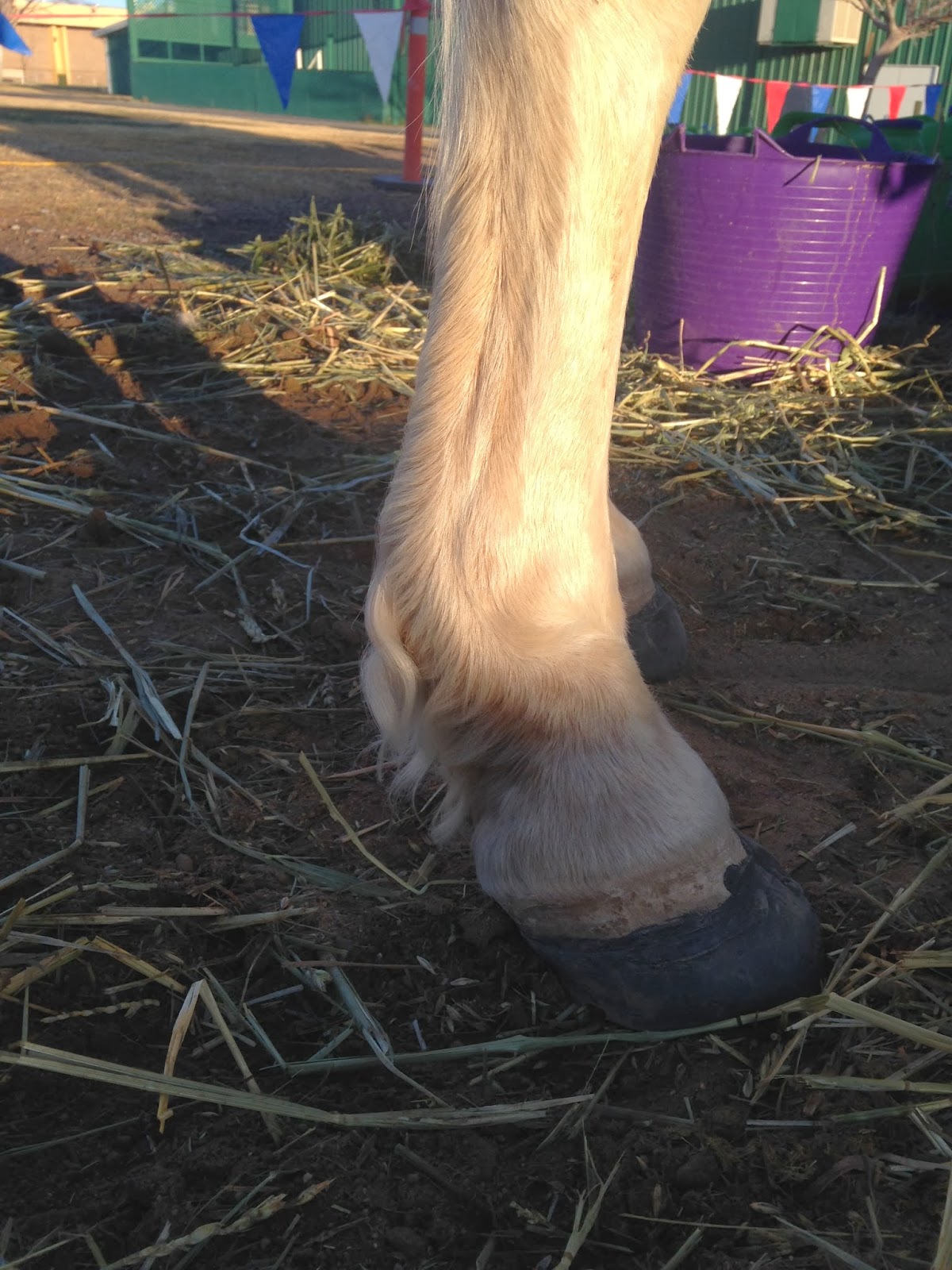 Eventually it warmed up enough to take a shower. Yes, it's true! The Desert Empire Fairgrounds has showers, and they’re free, and they’re hot. Nothing makes you feel human again like a shower. (Also:  I cannot recommend carefully tucking a hand warmer between your boobs and going to sleep; I woke up with a small burn on the right one. But at least I slept warm!)
Jaya came by to collect all six of us for pictures. We let the ponies roll in the arena, then lined ‘em up: 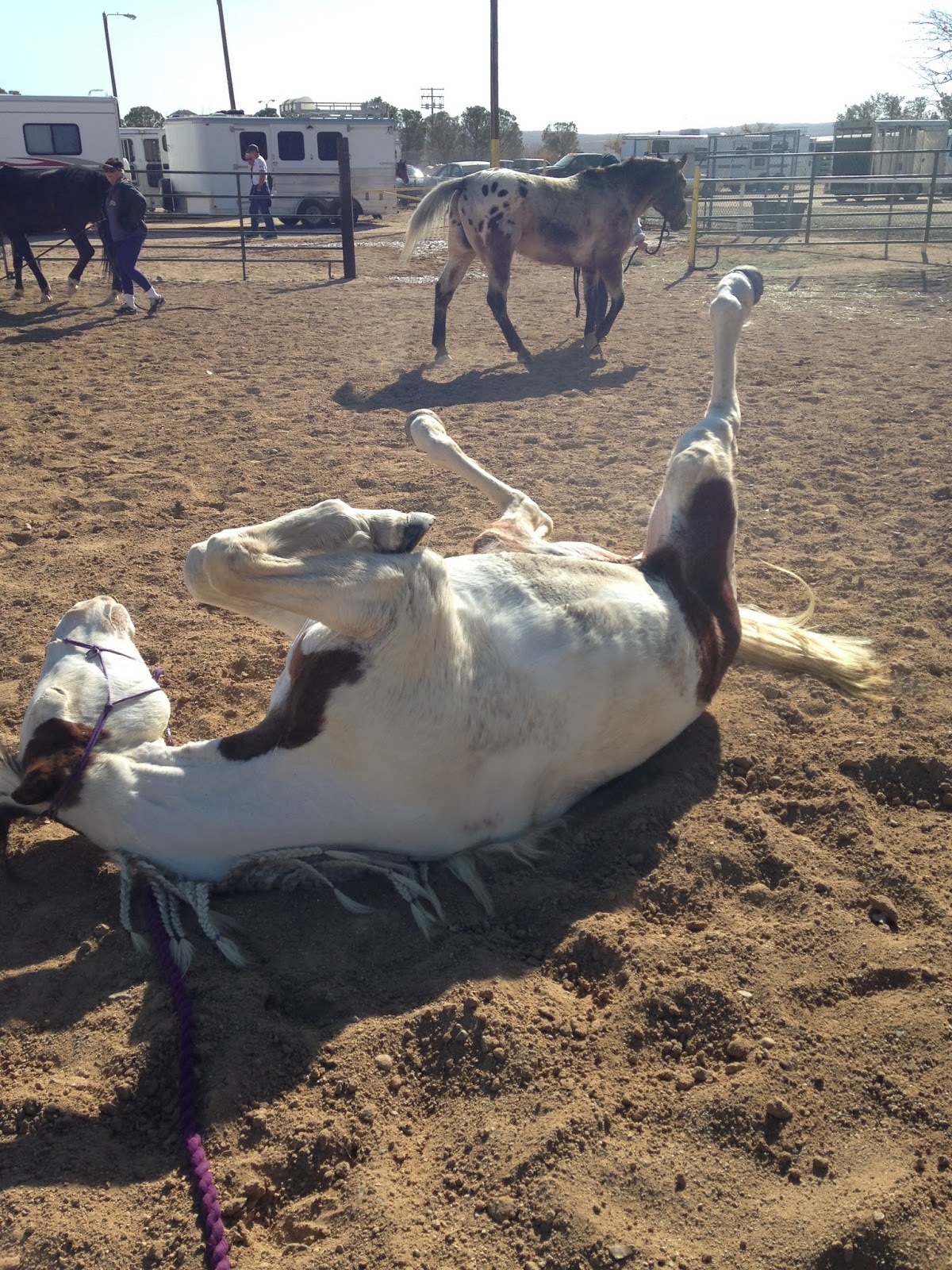 Yes, I’m bragging about this:  as we walked by to the arena, one of the vets, Sue, said “she’s moving good.” Calling her taciturn is a bit of an understatement, so that was high praise indeed. Yes!
Then on to breakfast and awards. There was much whooping and hollering. About half the Nevada Riders were there, and you know we were loud! Awards this year were very nice wine glasses. Yes, I made a 900-mile round trip and rode seventeen and a half hours to get a wine glass, and by god I earned it!
Melissa and Robert, the RMs, made Jaya tell the story of how Asali did bonus miles, but you'll have to visit Jaya's blog to read that! Then they made the three of us who’d finished our first hundreds come say something, and I was caught completely flat-footed and just babbled out something about how proud I was of my girl, and how much fun I’m having learning this sport.
Then more crying, more hugs, more pictures, and it was time to go. The first song that came on the iPod was Rock and Roll Suicide, and I left Ridgecrest belting out "And you're not alone! You're wonderful!" at the top of my lungs.
I headed out of Ridgecrest at 10:40 and made it to Dixie’s barn at 6:40. It was a hellish, hellish drive, but it was better than trying to rest in camp with everybody leaving. Dixie wasn’t eating as well as I’d have liked in the trailer, so we stopped at the Coalinga rest area on I-5 and grazed and ate the last pound of carrots.
Dixie hopped off that trailer and followed me over to a little patch of grass beside a pistachio orchard, and I thought about how far we’d come. We’ve both found our limits, regrouped, and found new ones. We aren’t just tentative friends; we are absolutely partners now. I held that lead rope on the side of the interstate pretty tightly, but I knew she wasn’t going to freak out on me, and she knew I wasn’t going to let anything hurt her. We really do share a more profound bond now. ;)

I got screwed at a gas stop — it had a $75 limit per transaction, and when I tried to re-swipe the card to finish filling up, Chase declined it with their slightly over-zealous fraud protection. But Ron has all the fancy digital fuel stuff, and he kept assuring me that we’d have enough gas to make it to the barn without stopping again, so we just roared on north. (And by roared, I mean, I set it at 62 and watched thousands of cars stream past me going 85 or more. It sucked.)
The far eastern end of I-580 has the worst pavement I’ve seen since I put Arkansas in my rear-view mirrors, and then we hit a huge rolling traffic jam in Livermore, but eventually we were back in Oakland, and then back in the hills, and then Dixie was home. I stashed her in her stall with extra extra hay, showed off my wine glass to the boarders in the clubroom, and finished it up. 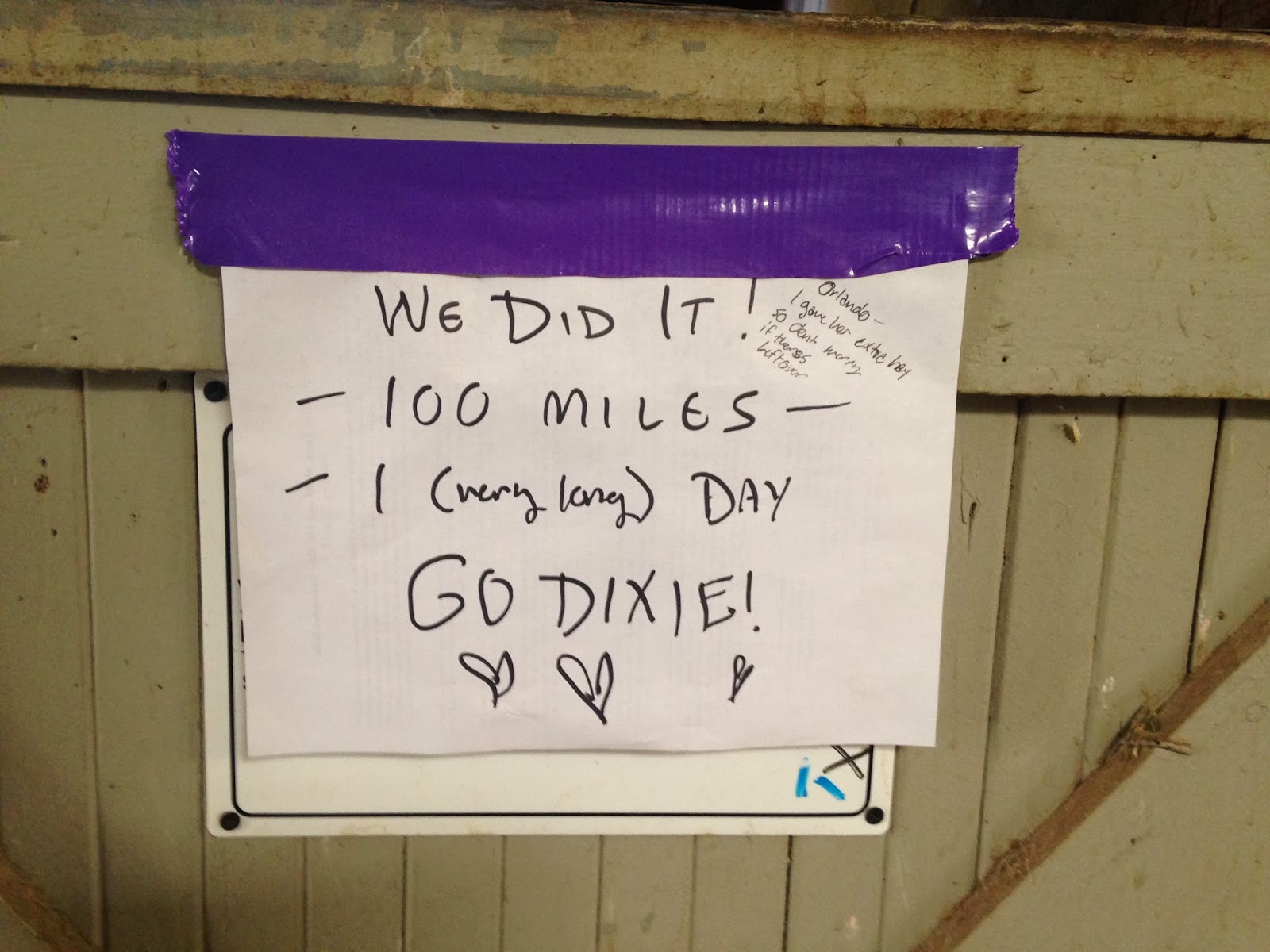 Fuel level low. Oh truck, I know how you feel. 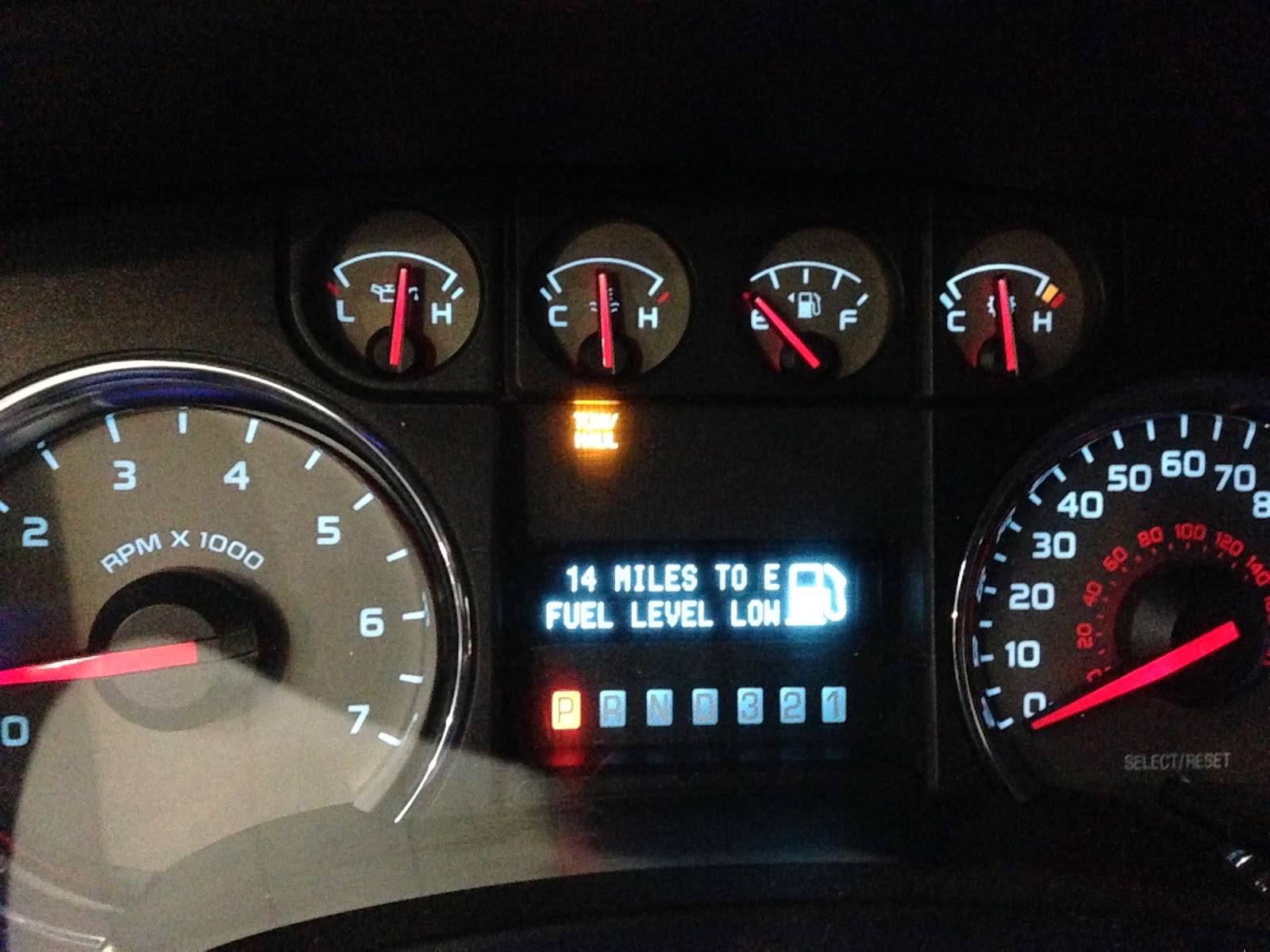 Then down to San Leandro, got the trailer parked in one try, and back up north to the house. I’d been saving the last shot of a particular bottle of whiskey (Old Potrero!) for my Hundred Victory Drink, and G put my sazerac in my wine glass, lol!

And Dixie continues to look really, really great. She was moving slow but very smoothly on Monday:

Dixie, two days after completing a one-day 100 mile ride. from Funder on Vimeo.

(Blogger just gives me errors whenever I try to upload video or change anything on my sidebars, which is why the sidebar hasn't been updated in so long. I'm moving to my dot-com soon!)

She's held her weight quite well. 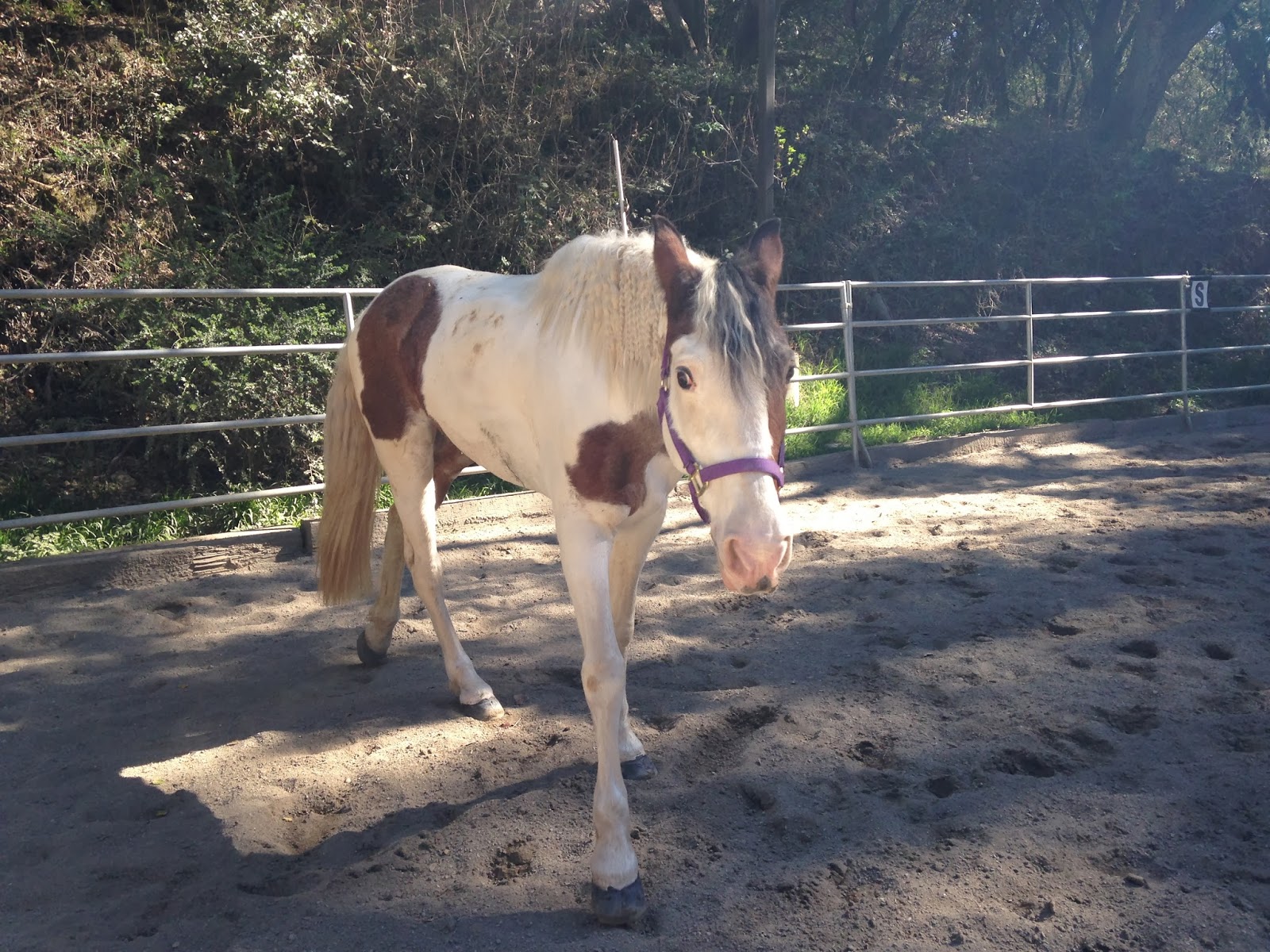 I pried some boots off on Tuesday, but after I’d gotten the fronts off, she asked very politely if I’d stop banging on her feet and scratch her — so of course I did. She’s a little thinner, of course, but I’ve seen horses look far, far worse than this after shorter rides. 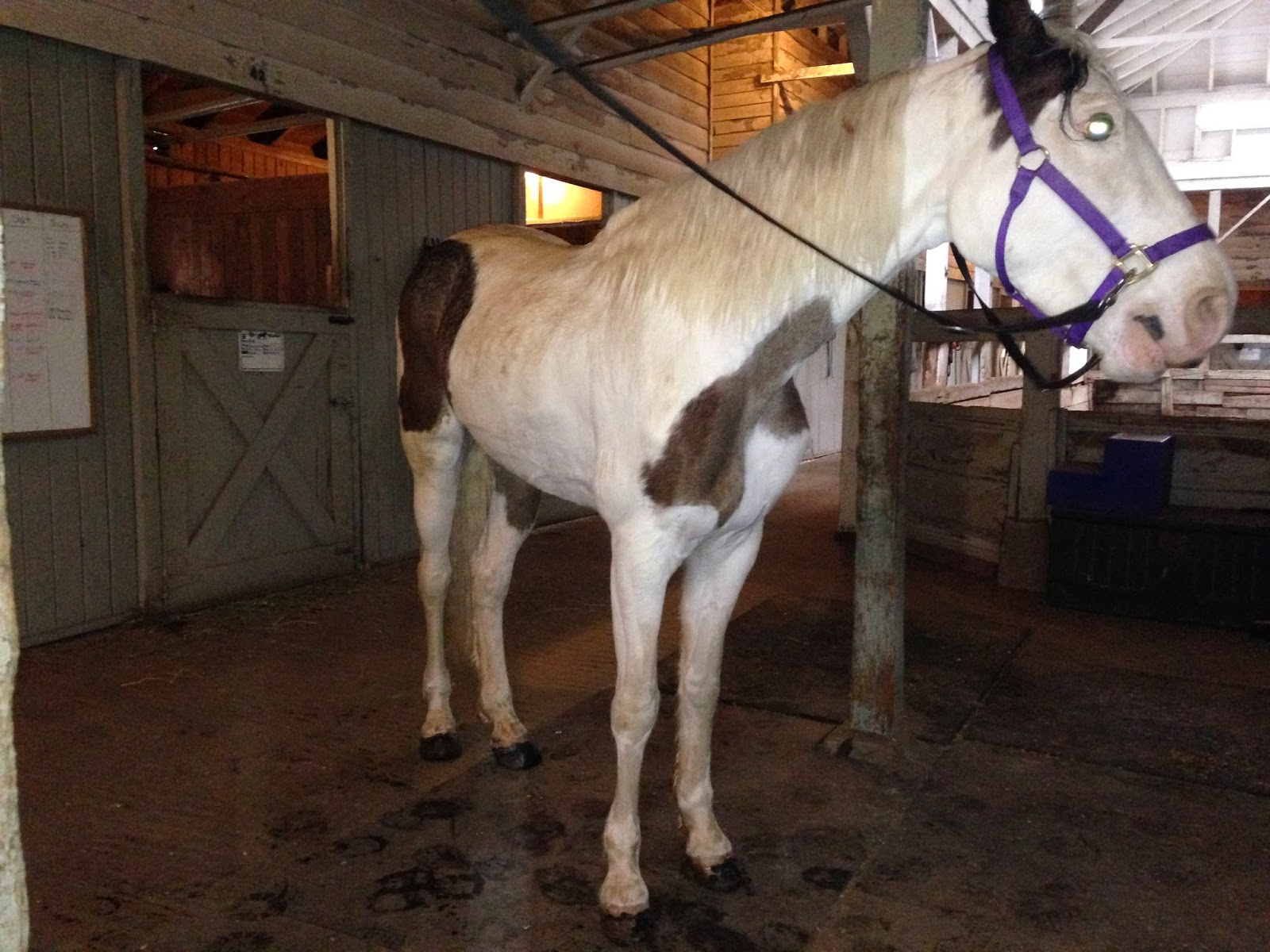 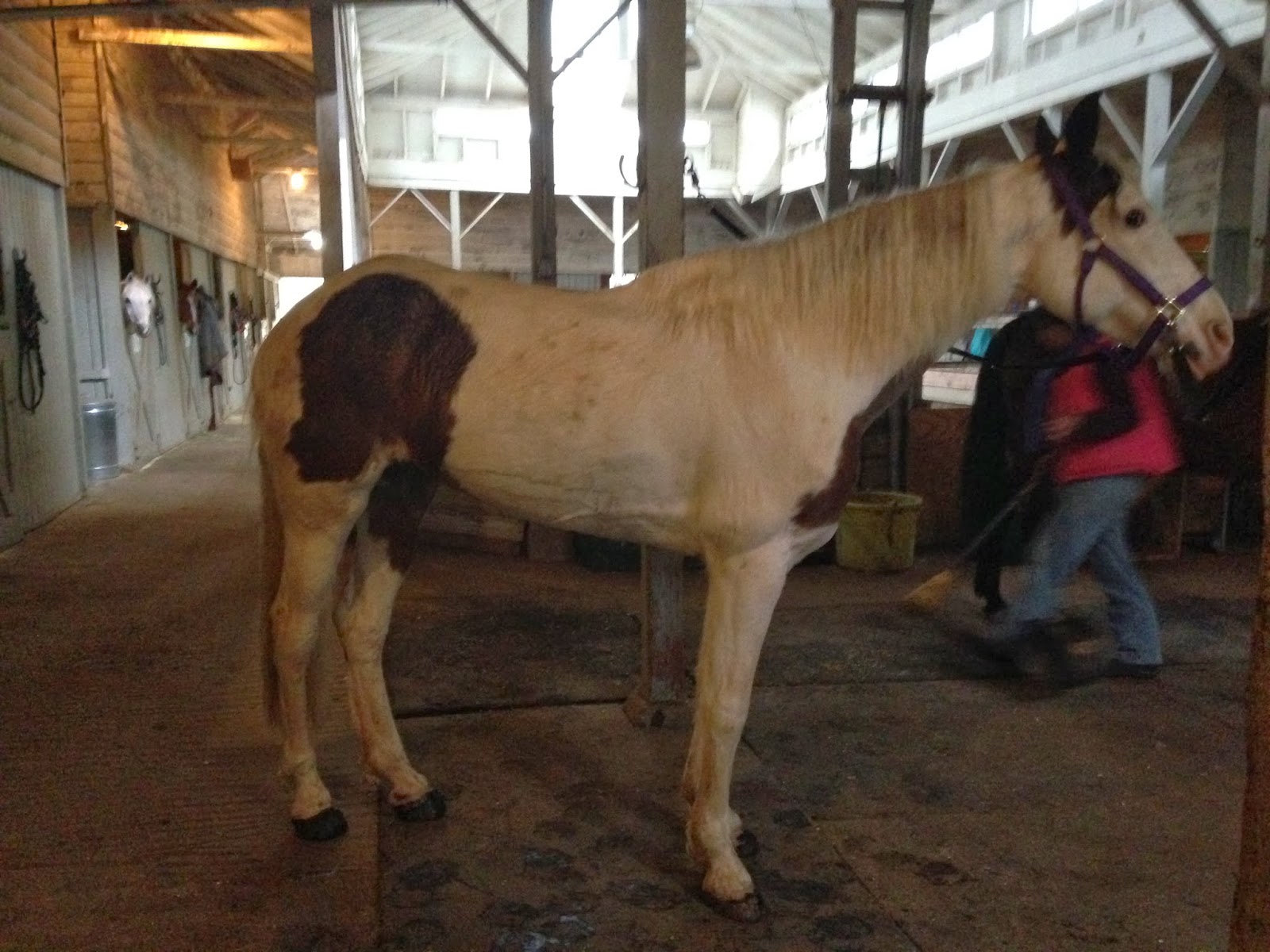 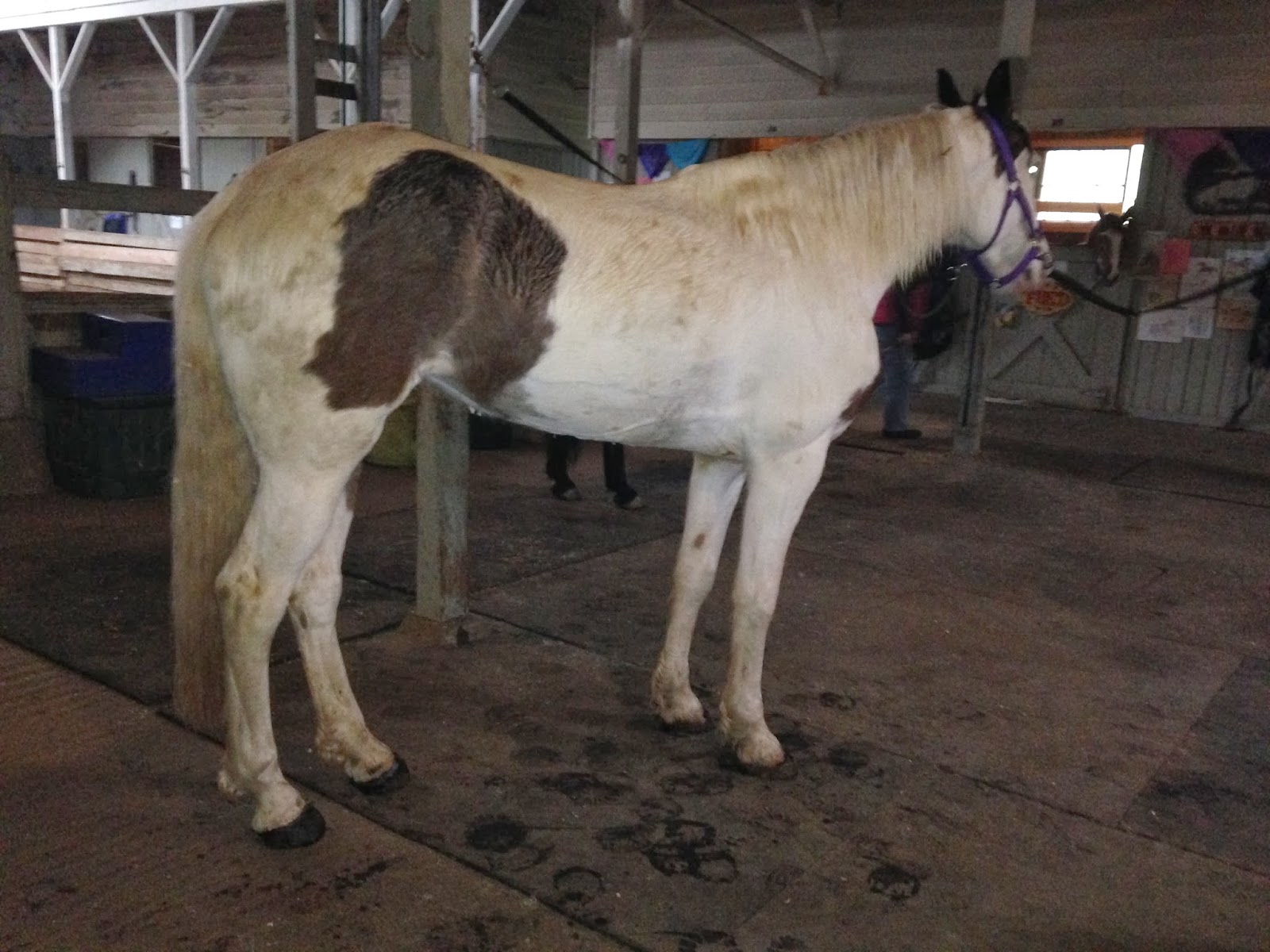 Not a very attractive set of pictures, but they show her condition pretty well, I think. She's wet after grazing in the rain for 45 mins, and she's eating yet another carrot while she waits for her massage.

Wednesday I finished pulling the boots and Dixie got her customary post-ride massage. She was a little tight in the chest, because we still go too much on the forehand, and she really liked the coronet band work, but Rebecca said this is the best she’s felt after any ride, and I agree. She was clearly in a great mood, finally answering the question that I’ve always wondered. Yes, this horse does like this sport just as much as I do! 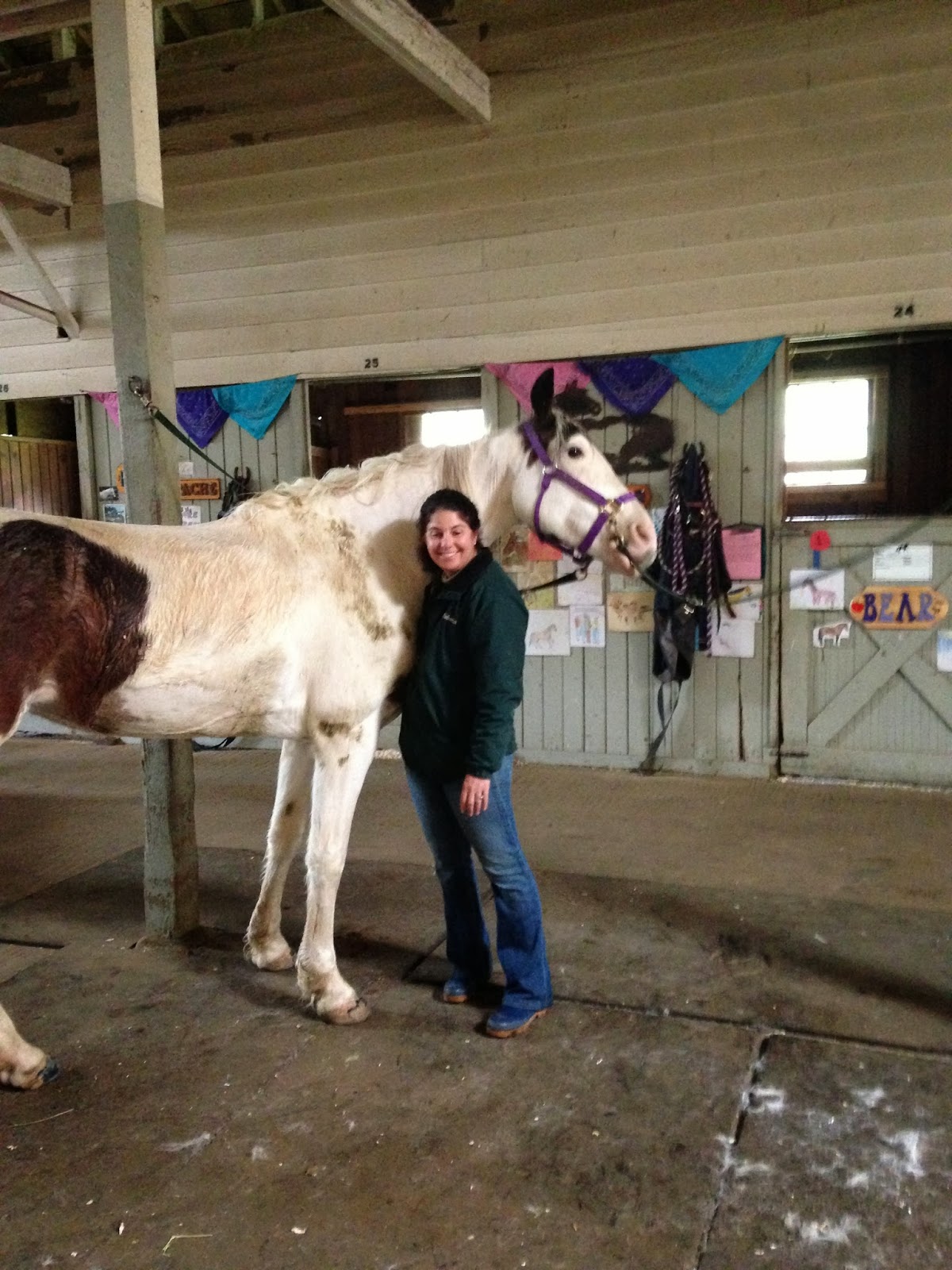 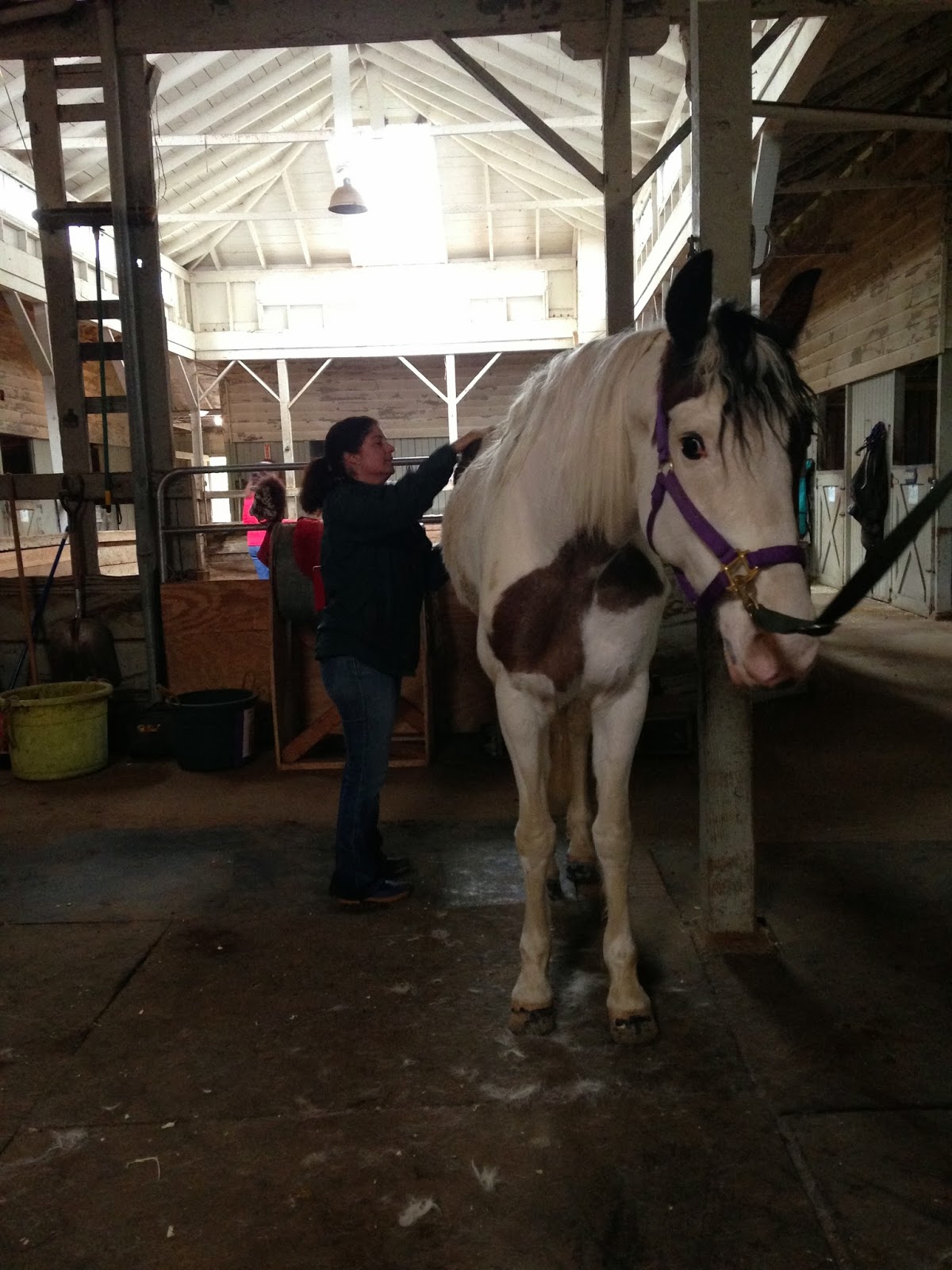 Such a soft look in her eyes :)

Gear/food analysis should be up this evening, then maybe boots tomorrow.
Posted by Funder at 3:12 PM